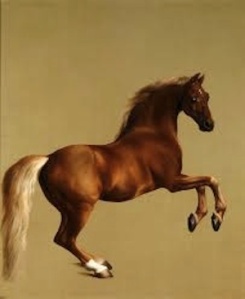 “For years I would make a weekly pilgrimage to the National Gallery in London, just to see the painting ‘Whistlejacket by George Stubbs. This mesmerizing picture registers like a ‘thunderbolt’ to the senses when seen close. The reality of swirling painting and undulating  translucent glaze seemed to flow into my sensory blood stream, evoking something deep and visceral.

I would generally approach the painting from a distance, beyond the gallery itself, as the painting could be seen through the corridor of doors of the other galleries that lead to the British paintings where Stubbs took center stage with other greats such as Turner, Constable and Gainsborough.

This captivating painting is one of the most sexually charged paintings in art history. Yes its a bold statement, but the years of observation and sudden notice has confirmed for me, that the true essence of this rearing horse, is exactly that. It reveals an animal that has been immortalised in perpetual heat.

Whilstlejacket was a stallion whose destiny was to procreate. This creative force of nature is profoundly conveyed by the carnal sexual dynamism evident by the fluttering brush strokes that erupt upon the surface texture of the canvas. There is a potent power surge that captivates the viewer as witness to the inflamed mane and penetrating gaze from the eye of the horse. It’s as if the painter arrests one with pure cathartic symbolism in tune to the impulse that serves all of creativity. That volcanic state that compels art to happen.

The genius of Stubbs lies in how he had a deep insight into the nature of the equine spirit and form of the horses he depicted. Stubbs published his ground breaking book, ‘The Anatomy of the Horse’ in 1766, which revealed for the first time, the inner bio-mechanics of the Stallion.

The knowledge gained from the eighteen months of intense dissection and drawings, gave Stubbs the most unique understanding of how the horse was constructed and could be revealed though the alchemy of paint. Commissioned by the 2nd Marquess of Rockingham around 1762, to paint the race horse ‘Whistlejacket,’ was described as “a paradigm of the flawless beauty of an Arabian thoroughbred”. Indeed, the painting embodies the energy and thrust of a living being.

Although I was not fully exploring equine themes in my work in London, it was not until I moved to Southern California (Thousand Oaks) that the horse became part of my emotional geography and I was able to reconnect to my passionate admiration for the art of Stubb’s and his pictures of animals in general.

When I began to paint horses and create the ‘Power Animal’ cycle of work, inspired by the natural wonders of being in California, the work of this incredible 18th century artist from Liverpool, England was a major influence in my work and continues to be a paragon of the equine form and spirit.” ~ Nazim Artist http://www.NazimArtist.com

“Only Riding the Horse of Love can you reach beyond the Sun and Moon and behold the perfect one.” 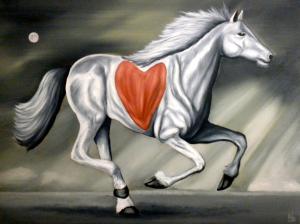 Commissions and Murals undertaken, prints with holistic glaze from The Art of Wellness collection available through the website.

In Nazim’s original paintings, there is a natural, non-toxic, environmentally friendly, GREEN compound of minerals that produces a continuous flow of healthy air anions or negatively charged ions. Anions will clean the air of mold, pollen, fungi, bacteria, odors, etc. These healthy ‘air anions’ will also help improve your concentration and awareness, plus create a feeling of well being. It is like stepping outside after a thunderstorm when the air is so clean and fresh. This is what Nazim’s exclusive glazing technique on the painting will do in your home or office. Each viewer is transformed by these Energized Artworks, both visually and experientially. Contact Nazim for more information: Nazim.Artist@gmail.com

4 thoughts on “Guest Blogger Nazim Artist Shares the Art that has Inspired his own Art!”